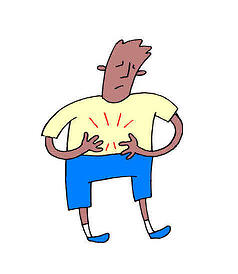 Upper endoscopy or a barium swallow x-ray help illustrate a crural defect and hiatal hernia. When determined to be significant, it is necessary to correct this defect prior to performing a fundoplication of any type.  A fundoplication acts to augment the the intrinsic antireflux barrier.  Transoral incisionless fundoplication (TIF), utilizing the EsophyX surgical device, acts to recreate the gastroesophageal flap valve from within the stomach (through the mouth) whereas the laparaoscopic Nissen type of fundoplication requires and external wrapping of the upper stomach around the end of the lower esophagus thereby improving the antireflux properties of the lower esophageal sphincter.

The advantage to TIF is that no deep surgical dissection is performed as is the case in the Nissen fundoplication.  The deeper level of laparoscopic surgery related to the Nissen procedure is felt to be related to most of the reported adverse events of Nissen antireflux surgery.  These serious, potential adverse effects include gas-belch-bloat syndrome, swallowing difficulty and chronic diarrhea and can be avoided by utilizing TIF over standard laparoscopic Nissen antireflux surgery.

The hybrid approach allows for the laparoscopic closure of the diaphragmatic defect or hiatal hernia that is followed by a transoral approach for fundoplication, done without additional incisions as it is incisionless surgery.  The TIF allows for the creation of a robust antireflux valve in the setting a corrected diaphragmatic crural defect that together will provide a more complete antireflux surgery.