Everyone occasionally has heartburn. This occurs when stomach acid flows backward into the esophagus, the food pipe that carries food to the stomach. People usually experience heartburn after meals as a burning sensation or pain behind the breast bone. Often, regurgitation of food and bitter-tasting stomach acid accompanies heartburn. Antacids or milk temporarily relieves heartburn for most people.

Why Does Heartburn Occur?
To understand heartburn, let us look at the body's anatomy. The esophagus carries food and liquid to the stomach. A sphincter, or muscular valve, is located at the end of the esophagus at the border between the esophagus and stomach. Known as the lower esophageal sphincter (LES) this muscle contracts much the same as the anus does. The sphincter should maintain a certain pressure to keep the end of the esophagus closed so that stomach juices are not admitted. The LES muscle should only open when food is passed into the stomach. 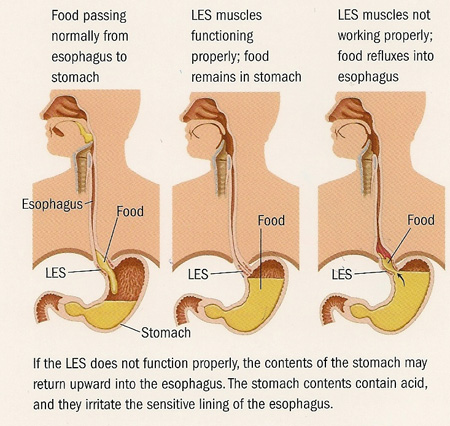 However, the LES muscle does not always work perfectly. It is felt that the problem is with inappropriate, transient relaxations of this sphincter valve that result in reflux. Sphincter function can be easily overcome by a number of factors, the most common being eating a large meal. Along with swallowed air, a large meal causes an upward pressure in the stomach to rise, thereby overpowering the LES muscle. Other factors that reduce the LES pressure and allow reflux are: 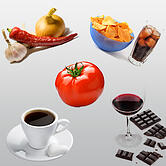 Heartburn is common, but is it serious?
Heartburn and reflux are extremely common, with 10 percent of the population experiencing them daily. Twenty-five percent of pregnant women have heartburn. Even though heartburn is common, it is rarely life threatening. Severe cases, however, can result in injury to the lower esophagus that requires treatment.

What is a Hiatus Hernia?
The esophagus passes through a muscle, called the diaphragm, which separates the lungs from the abdomen. When the opening in the diaphragm enlarges, a portion of the stomach can protrude (herniate) through it into the chest. This is called a hiatal hernia. A persistent hiatal hernia may produce significant heartburn. Many people with a hiatus hernia do not experience heartburn. However, 40-50% of patients with a hiatal hernia have reflux. A hiatal hernia and GERD can occur independently from one another. 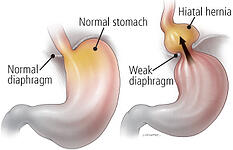 Complications and Unusual Presentations
Besides heartburn, the other major problems that can develop with reflux are: 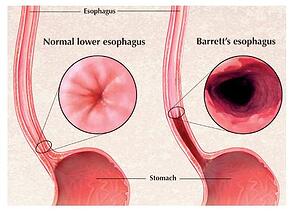 Diagnosis
The primary tests used to diagnose reflux are:

General measures the patient can take to reduce reflux are:

The team at Lenox Hill Hospital was the first center in the New York City metropolitan area to offer the EsophyX TIF (Transoral Incisionless Fundoplication). The EsophyX TIF procedure is also available at other hospital affiliations that include The Langone New York University Medical Center and Beth Israel Medical Center. Working in conjunction with the developers and manufacturers of the endoscopic reflux therapy devices, we have taken the lead in the diagnosis and management of gastroesophageal reflux disease.

Stretta® Therapy is an other minimally invasive treatment for gastroesophageal reflux disease (GERD), the condition that causes chronic heartburn and regurgitation. If you are taking prescription anti-reflux medications such as proton pump inhibitors [PPIs] (Prilosec, Prevacid, Nexium, etc...) or H2-receptor antagonist drugs (Tagamet, Zantac, Pepcid), and you are not achieving good control of your symptoms, you may benefit from additional therapies that may be available to you, such as Stretta Therapy.

Stretta is a minimally invasive, outpatient procedure that takes approximately 60 minutes to perform. Patients usually receive conscious sedation (the same sedation used for your endoscopy procedure) and an instrument is passed through the mouth, so there are no visible cuts or scars that result from the procedure. Through a special tube, a special type of energy is delivered to the deep muscle layer of the lower esophageal sphincter that is responsible for preventing reflux. Through a remodeling process, the muscle becomes less floppy (compliant) thereby improving function.

In Summary…
Heartburn occurs so commonly that it is normal for everyone to experience it sometime. However, when heartburn is persistent, it needs to be evaluated, and long-term follow up care is often required. Heartburn occurring two times weekly or more warrants a medical evaluation.

Medical treatment along with lifestyle changes are usually very effective and can prevent complications. For those patients requiring long-term, chronic medical therapy, an antireflux procedure, such as EsophyX or Stretta, offer a viable and usually successful alternative to more invasive surgeries or a life-long need to take drug therapies that are not always successful.

To learn more about your treatment options you may contact our offices at: