As mentioned in our last blog post, a common but less frequently diagnosed form of reflux is what is known as laryngo-pharyngeal reflux, or LPR. Note what Dr. David Brian, an otolaryngologist in Dodge City, KS had to say on the subject:

Nowadays, everybody has heard of gastroesophogeal reflux disease or GERD.
Of course, heartburn is the layman’s term. It’s the discomfort we get in the pit of our stomach after eating a spicy or greasy meal, or when we eat too late and go to bed with a full stomach.
A meal stimulates the
production of hydrochloric acid, pepsin and other digestive enzymes, plus the release of bile from the gallbladder.
The full stomach pushes up against the diaphragm when we are lying down and the digestive juices get pushed up into the lower esophagus, whose lining isn’t as tough as the lining in our stomachs, and we get heartburn.
But another type of GERD, called laryngopharyngeal reflux or LPR, does not cause heartburn and is often misdiagnosed.
There is a band of muscle at the entrance of the stomach known as the lower esophageal sphincter that prevents acid from backing up into your esophagus. If this band of muscle is not functioning well, you may have lower esophageal sphincter dysfunction (LES), which creates a backflow of acid into your esophagus, throat and voice box, causing LPR.
The symptoms of LPR can consist of a dry cough, chronic throat clearing and a sensation of something being stuck in the throat. LPR is the single most common cause of chronic voice disorders.
LPR is often under-diagnosed and thus under-treated ,and traditional GERD tests are often ineffective.
Part of the difficulty in diagnosing LPR is as a result of symptoms that may be intermittent and may change with dietary and other lifestyle changes. When LPR is diagnosed, it is often not treated effectively because of too short of a therapy and inadequate treatment doses.
Basic treatment is on several levels. Dietary and lifestyle 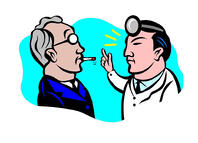 changes are first: Avoid eating and drinking too much three hours before bedtime. Avoid overeating and reclining just after eating. Avoid coffee, tea, mints and carbonated soft drinks. Avoid tight-fitting clothing or belts. Avoid alcohol and tobacco.
If dietary and lifestyle changes don’t help,
medications and/or surgical interventions may be required. And some treatments may take as long as six months. As with most things, proper diagnosis is where the healing can begin.
So, if you are having the symptoms of LPR, talk to your medical provider.